Posted on March 12, 2016 by brookfieldfarmhoney

We had some clear weather at the end of February, and I took advantage of it to check the hives. 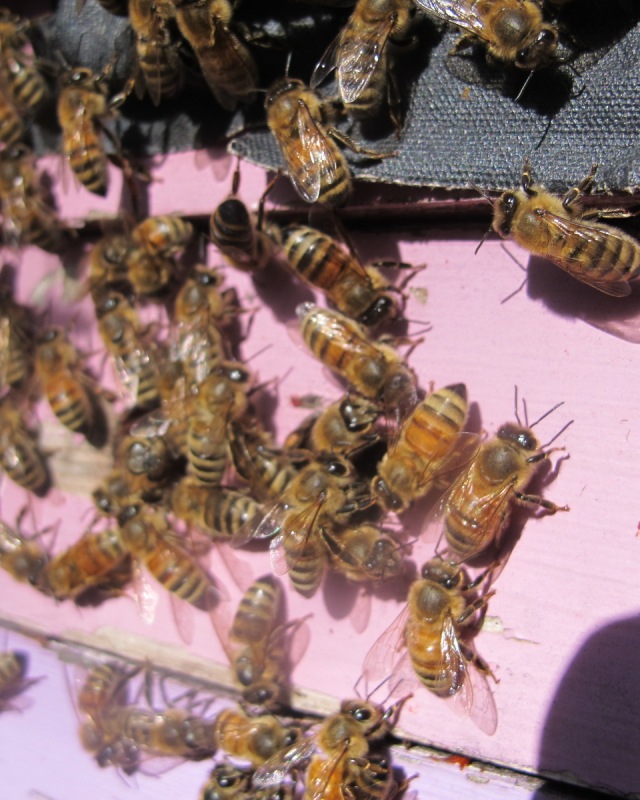 For the record, Brookfield Farm Bees And Honey had a 13% loss of beehives from September to March. I’m often asked this question, but let me say that I think the number has little real meaning. I don’t like treating beekeeping like a contest, or a simple problem in mathematics. I also think percentages tend to incite competition with false feelings of triumph and failure.

What Does The Hive Loss Number Mean?

Back to the numbers:

In one agricultural bee yard I saw 28% loss. That was depressing. In another it was 17%.

So if one wanted to “play” who-did-better I could trot out the zero loss yards – I’m brilliant, my bees are great. But I could equally point to the 28% loss – I’m a fool, my bees are horrid. Neither statement is true.

What interests me is that I have many of the same lines of bees in both agricultural and mountain areas.  But over the last few years, I’ve seen greater losses in agricultural areas.  Before we jump up and down and say field pesticides, which it could be, I’d also like to point out that in agricultural areas there are more beekeepers.  More beekeepers mean more drone mothers who may not be 1) adapted to this climate and 2) may be living the “chemical” life of antibiotics and in-hive pesticides….In other words, not the moms of the boys I want my girls to mate with…

Before I go on about what I found, first, a bit of background:

I keep bees in Whatcom County, Washington (state). We are the most northwest corner of Washington, west of the Cascade mountain range. Rain and snow are the weather forecast here from October to March, and often beyond (it’s pouring as I write this).   The north fork of the Nooksack River runs through the area where I have bees.

The hives are “down river” and “up river”. Down river is agricultural: blackberry, blueberry, raspberry, kale and corn (some organic, some conventional).

Up river is forest: fireweed, snowberry, salmonberry, thimbleberry, blackberry, and tons of wildflowers. The areas are divided by a north/south running ridge called “Van Zandt’s Dike.” 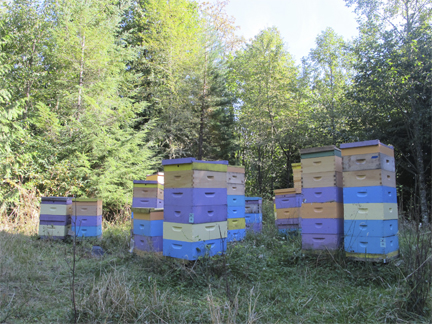 What I Found in Brookfield Farms Hives:

The Dead Outs:  These are always more interesting.

They’re all there, just dead

I saw no signs of nosema.   This has been pretty standard since I moved to using an oil based patty to delivery essential oils in the fall. When I used ½ to 1 gallon of syrup, I saw nosema. For me: best not to add liquid to a hive in the fall (remember: it’s rain and snow here for 6 months)

Varroa is a bit harder to judge on a dead out. But no living bees had varroa. And, yes, the living bees were using the dead outs as handy feeders. I assume they started raiding before the dead outs were totally dead.

Tons of nice bees in some hives. Good sized clusters in others. 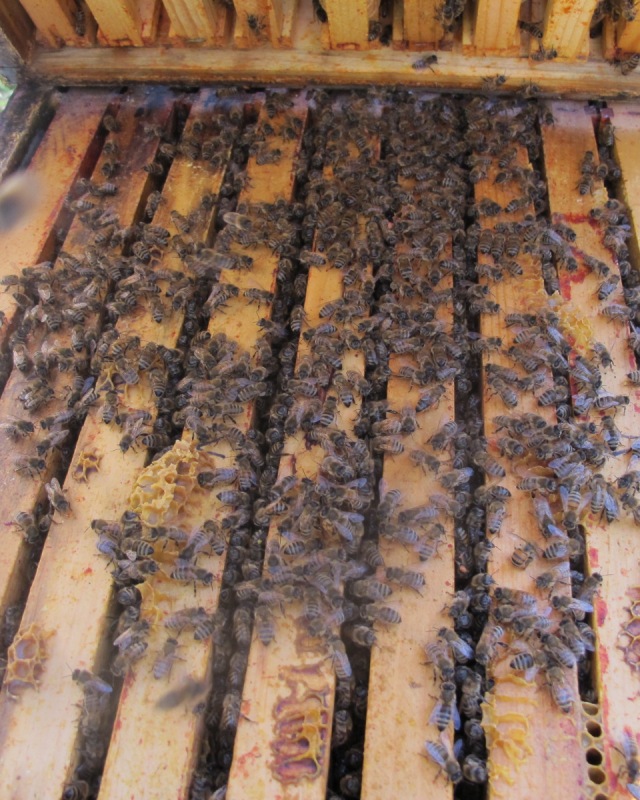 A nice little cluster of bees

A good amount of stores in most.

Still working on their fall honey

No varroa visible. No drone brood to open. 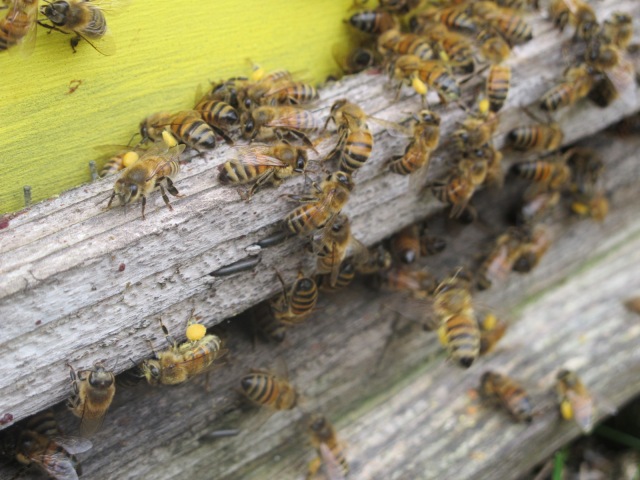 A bit of sealed worker brood in some, none in others.

Honeybees on sealed and open brood 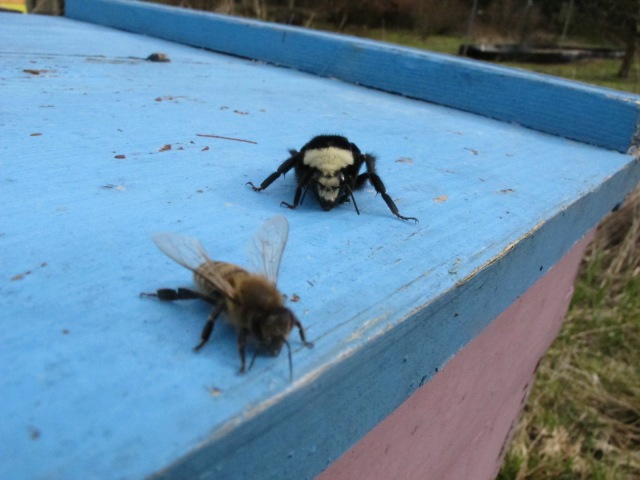 We are all bees together

These were hives that had no bees flying. I knock on the side of the hive, put my ear to it, nothing is heard. “Dead out” I mutter. I finish the bee yard, then go back to check what killed the dead outs, only to find a nice cluster of bees in the center of the hive, happily surrounded by honey. I swear I hear them shout “close the hive, lady, it’s cold out there”.

About 10% of my hives needed to be fed. The bees in these hives had plowed though their 70 pounds of winter stores. These hives were noted so I would not pull larva from them for queen breeding.

I feed with honey from my hives, kept back from last year’s harvest.  It’s wrapped in newspaper, to keep the bees from being stuck. 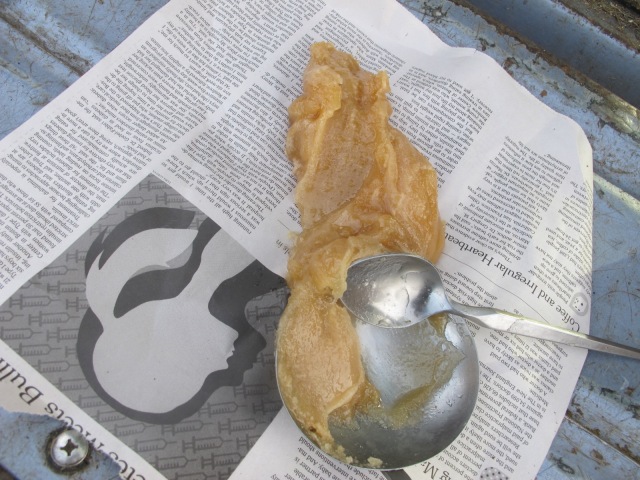 Yes, diseases can be spread this way. But I’m willing to take that chance over feeding cane sugar. If I run out of my own honey, I do feed cane sugar – never the honey from someone else’s hives, even if I think they have great honey (for me) and great beekeeping practices.

Hives that had survived with a nice looking cluster or a great deal of bees without consuming all their stores were marked for potential future-queen-larva. I like to pull the larva from a number of hives, to get as much genetic diversity as I can in my smallholding.

What The Future Holds:

That’s the news from Brookfield Farm Bees And Honey in Maple Falls, Washington.  Winter is not over here in the second week of March. It was pouring rain outside as I wrote this, and we had gale force winds the other night (note to self – clean gutters). Snow is falling on the lower mountains that surround us and on the high peaks 40 minutes up river. It’s wet and cold – not the optimum condition for bees. There’s a rumor that we’ll see sun in 2 weeks time. We’re 3 weeks away from the start of the first potential honey flow (Big Leaf Maples), if it doesn’t rain straight though the bloom.

As usual, you can find us at two Seattle Sunday Markets, the Sunday Fremont Market and The Ballard Farmers Market.  Come on down and visit if you’re in the area.

How are things going in your part of the world?  Any surprises, hopefully good ones, from your hives heading into spring, or into the fall?