Posted on June 1, 2012 by brookfieldfarmhoney 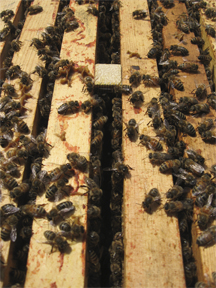 Every year I have purchased ten queens for new up-river hives.  This year I was able to buy the girls from Cold Country Queens in New York State.  I particularly wanted queens from this source because they raise Russian Queens and use them in an apiary that, like mine, needs bees that can endure cold weather.

I really like Russians (called Primorsky Honeybees anywhere but in the US – go figure).  They are resistant to Varroa mites and they do very well in cold climates. 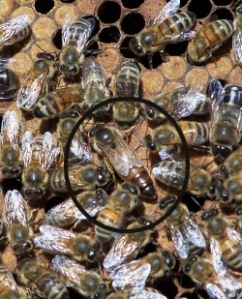 They do have a bit of a reputation.  They are not the nicest bees in the world, but I’ve never had much of an issue with them, except head banging. I simply wear a veil, which I do anyway, to keep them from getting stuck in my hair.   They are said to swarm easily.  That’s not been a problem for me.  Or one could alternately say, my Russian queens tend to swarm as easily as my New World Carniolan Queens.  It’s just down to me to keep up with the bees and anticipate what they’ll do given the honey flows and changes in weather.

BeeBehavior has general overview  the history of Russian bees.
The USDA site, Primorsky Bees, goes a bit further in depth. 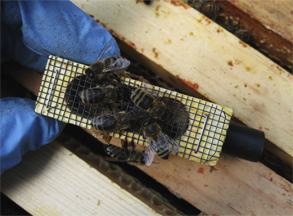 I installed my new queens in splits and placed them in three of my up-river bee yards.  These are in the bee yards in and closest to Brookfield Farm in the foothills of Mt. Baker near the Northfork of the Nooksack River.

My aim is to add some new genetics to my area. The queens I raise at the farm are open-mated.  As I am pretty much the only beekeeper crazy enough to keep bees up here, my queens mate primarily with drones from my own near-by bee yards and the feral honeybees that have survived up here.  (Honeybees have been in and around Maple Falls for nearly 100 years). 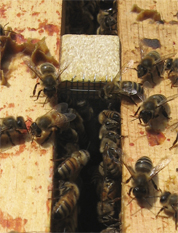 Checking out the new queen

I place their cages between the top bars in the center of the brood nest with the cage wire facing away from the front of the hive.  Why?  Because I’ve always done it this way and it works.  I figure if someone put me in a box I would not want to face in the direction of the draft.  Just a feeling, no studies, no science.

The queens spent a week in the hive with their new workers.  Seven queens were released by the bees.  Three needed a little help: the bees were chewing though the candy, but had not quite opened the tube.  When released, these queens simply walked down into the hive, having been accepted by the worker bees.

Now it’s wait and see.  As of last peek, they are laying nicely.  I’ll just leave them to it for two weeks now. If all goes well, I’ll have some Russian drones flying later in the summer to, hopefully, meet up with the Brookfield Farm queens on their mating flights.

That’s all the news from Brookfield Farm Bees And Honey in Maple Falls, Washington.

What’s your favorite type of honeybee?

Also if anyone is or knows anyone who is raising Apis mellifera mellifera (the little black honeybee) please contact me.  I would really love to add these into the genetic mix up here.

Brookfield Farm, a small off-grid apiary in Maple Falls, WA focuses on the beauty and bounties of Washington’s wilderness. I sell honey from our bees, whose naturally-treated, antibiotic-free hives are home to bees who fly Washington’s mountains and farmlands. Herbal salves and lip balms from Brookfield beeswax. Delicately infused honeys and vinegars. Varietal honeys from independent Washington beekeepers. Karen Edmundson Bean: beekeeper, photographer. Her love of the wilderness inspires her to discover new ways of bringing the wonders of nature to others. Brookfield Farm : the tastes, textures, sounds, and images of nature.
View all posts by brookfieldfarmhoney →
This entry was posted in 1 Beekeeping, 5 Queens and Queen Rearing and tagged 1 Beekeeping, 8 Brookfield Farm & Bees, bees, Brookfield, Brookfield Farm, honeybees, install, Maple Falls, queens, Russian, Washington. Bookmark the permalink.