Posted on January 19, 2012 by brookfieldfarmhoney 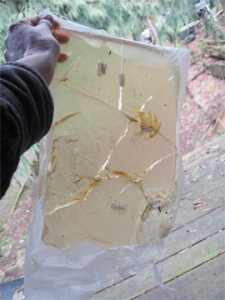 After a hard year of rains, we’ve been having a warm(ish) winter here in the Pacific Northwest.  It’s been downright “tropical”: highs to 45 degrees F on a regular basis.  I like this, but it’s not so good for the bees.  They don’t slow-down as much or go into prolonged cluster.  They eat a lot.  So when the weather got even warmer, 50 degrees F (break out the bathing suits!), we made some bee candy (fondant) and I went around the hives to distribute it to those who looked like they were already eating in the top box.

I leave 50 to 70 pounds of honey on each hive going into winter.

Many of my hives had larger colonies of bees than normal for this time of year.

Many of the bees in those hives were already in the top box.

There is NO Forage in this area from October to February, and February is only Alder Pollen.

I would never feed liquid feed in the winter here.  It is wet enough in this northwest corner of Washington.  The bees do not need added moisture in their hives.  Plus, you never know when it is going to snow.

For years that name put me off.  Fancy name, must be complicated.  It’s not difficult at all.  Fondant is “a thick paste made of sugar and water…(or) candy made of such a paste”, according to the dictionary that comes with my Mac.

Recipes for this appear in many bee magazines and on the web, but the easiest one I’ve found to follow is in my husband’s mother’s 1935 cookbook from England: the basic sugar candy recipe.

One part water, 4 parts sugar, boil until it forms hard “tails” when dropped into water. That’s about 200 degrees F, according to Ian (the husband) who made the bee candy this year.

Because I had bee feed left from the fall we started with that.  It’s a ¾ sugar, ¼ water mix with spearmint, lemongrass, and thyme oil.  Then Ian added more cane sugar.  (No photos of him cooking it, he kindly did this while I was working on the web at the library).

He did mention that it was a pain, until he realized he could just walk away and let it cook down while he made furniture (he does fabulous handcrafted furniture of historical designs that can be seen at Walking-Wild.com).  Now, Ian cooks brilliantly, if I walked away from a cooking pot it would burn.

Pouring out the Bee Candy

The candy is poured into cookie trays lined with wax paper.  Then set in my work area to cool.  I’ve realized I should have done something like cut it into squares before it completely cooled.  As that would have been some time in the middle of the night, I would not have done it any way.

Getting the Candy Out

I put these into a sealable bucket, with each layer lined with wax paper.

A single piece of fondant

Putting the Candy In 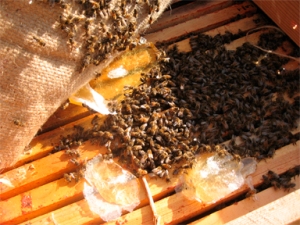 I only open the tops of the hives at this time of year.  So each lid was popped, the insulation (bead board) removed, and the burlap lifted to reveal the top bars.

The candy is simply placed on the top bars.  In some hives this is greeted with elation.  In others, I probably don’t have to do it, but now I’ll worry less.

Then burlap back down, insulation back in, top closed, and the hive’s “rain hat”: a piece of asphalt roofing lied back down.

One day latter the snows arrived.  Two days later we could no longer drive to the farm beeyard : a 3/4 mile walk though 2 feet of snow.

Before The Snow Storm!

Brookfield Farm, a small off-grid apiary in Maple Falls, WA focuses on the beauty and bounties of Washington’s wilderness. I sell honey from our bees, whose naturally-treated, antibiotic-free hives are home to bees who fly Washington’s mountains and farmlands. Herbal salves and lip balms from Brookfield beeswax. Delicately infused honeys and vinegars. Varietal honeys from independent Washington beekeepers. Karen Edmundson Bean: beekeeper, photographer. Her love of the wilderness inspires her to discover new ways of bringing the wonders of nature to others. Brookfield Farm : the tastes, textures, sounds, and images of nature.
View all posts by brookfieldfarmhoney →
This entry was posted in 1 Beekeeping and tagged 1 Beekeeping, 8 Brookfield Farm & Bees, bee, Brookfield, Brookfield Farm, Candy, feed, Fondant, hives, honeybees, how to, Karen Bean, Maple Falls, Winter. Bookmark the permalink.