Posted on November 9, 2011 by brookfieldfarmhoney

Beaumont : one of my packgoats

August beekeeping in my area is slow.  This is the northwest corner of Washington state, as August arrives, there are still flowers to be had: fireweed, golden rod, thistles, and pearly everlastings all bloom around this time, but just enough to fill a super in a good year.  So August is when I put an empty super on each hive and start walking into the wilderness.  Or so it is in most years.  This year was a little different.

The 10 months of rain (no joke) that have made for a disastrous honey year here, left deep snow still standing at the 5,000 foot level in the mountains.  I don’t generally care for snow hiking.  I’m willing to put up with a bit of snow in mid-October, but not in August.  I must admit pushing though snow with a full pack on my back does not sing to me.  The pack goats are also in agreement that they would rather not sink belly deep into snow – somehow it takes all the fun out of walking for them as well.

So what’s a Beekeeper to do?  Tour Washington state in short walks: from the desert to the mountain rivers to the ocean.   What follows is a sample of my meanderings in Washington State

Dry Falls are the bones of what was possibly the largest waterfall that ever existed on earth.   The top rim is 3.5 miles long.  The drop is over 400 feet – 10 times the size of Niagra (according to wikipedia).  When the waters flowed, they are thought to have churned though here at around 65 miles per hour.  That was a while back: about 20 thousand years ago. 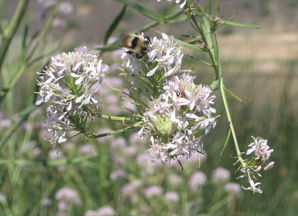 During the last ice age a ice damn created a massive lake in Montana, “Lake Missoula”.  As warming began, that damn melted or floated, releasing the waters southwest into what i

PK, packgoat in training (a babe)

These are easy: they are both about an hour from my farm.   Cougar Ridge provided one of the few walks that the baby pack goats could do this year because it lies a bit lower than the snow level.  Skyline Divide was a fast late-season walk between rainstorms, which have arrived early this year. Both of these lovely ridges are arms of Mt. Baker, our active volcano that is the second most glaciated mountain in Washington.

The Oceans: The Qyullayute Needles, Olympic Peninsula, Washington western shore of the

This is the western shore of the Olympic Peninsula.  It’s called the southern walk.  I did the northern walk about 2 years ago.  The formations are mainly sandstone and siltstone. The wear of weather and tides have carved them into amazing crags that rise like fantasy towers from the ocean.   In the fog they can seem like another world. At low tide they and their tide pools can be explored, as long as one keeps an eye on the time: the tide comes in quickly here.

(You can find more geology details about this exquisite area at  this link: Geology of Western Olympic Peninsula Link.

A churning ocean, astounding rocks and stone towers, are only part of the attractions of this coast.  Wildlife surrounds you as you travel: gulls, cormorants, bald eagles, sea lions, and river otters (those took me by surprise – river otters in the ocean, who knew?). And, of course, bumblebees.

All this beauty comes at a price.  The headlands that jut out into the ocean must often be climbed rather than walked around.  Climb is the correct word.  In each location there is a rope, with knots in it.  “Walkers” must pull themselves up walls of mud that can tower 200 feet high, while carrying one’s pack.   So along with the joys of the area, one gets the challenge of a climb.  I admit it, I could do without that challenge.

That’s the travelogue: Washington, land of adventures: from the deserts, to the mountains, to the oceans.  A glorious place to live, and, usually, to keep bees.  Let’s hope for less rain next year.

Brookfield Farm, a small off-grid apiary in Maple Falls, WA focuses on the beauty and bounties of Washington’s wilderness. I sell honey from our bees, whose naturally-treated, antibiotic-free hives are home to bees who fly Washington’s mountains and farmlands. Herbal salves and lip balms from Brookfield beeswax. Delicately infused honeys and vinegars. Varietal honeys from independent Washington beekeepers. Karen Edmundson Bean: beekeeper, photographer. Her love of the wilderness inspires her to discover new ways of bringing the wonders of nature to others. Brookfield Farm : the tastes, textures, sounds, and images of nature.
View all posts by brookfieldfarmhoney →
This entry was posted in Wilderness Walking and tagged Baker, Dry Falls, Mount, Olympic, peninsula, senic, state, Washington. Bookmark the permalink.