Posted on July 10, 2011 by brookfieldfarmhoney

My previous blog post was about shaking bees to put into mating nucs in our on-going adventures in queen rearing at Bruce Bowen’s Bees in Mt. Vernon, Washington.  This blog is about uniting those bees with fully-formed queen cells in mini-nucs.

Yes, it’s a bit out of order, because we were able to begin with queen cells raised by bee breeder and researcher Sue Cobey (http://beebiology.ucdavis.edu/PEOPLE/susancobey.html)

We picked up the cells at the Washington State University Research Station in Mt. Vernon.  The cells, on their cell bars were transported to Bruce’s honey house in a large cooler where they rested upon a hot water bottle and a towel.

Box of Bees Awaits the Mini-Nucs

The box of nurse bees were set beside the work table.  They were scooped out of the box using a clean Spam can.  It gives just the right amount of nurse bees.

We tried for a line, but beekeepers seldom walk, or stand, on the straight and narrow.

Most everyone worked without gloves.  That can sound a bit nervous-making at first, but the bees being placed with the queen cells are nurse bees and they have nothing to protect until they unite with their queen cells.

Person 1: Removed 2 frames from one end the mini-nuc.  We realized that this could be best served in the Set-Up stage.  With the well-drawn frames stacked in front of Person #2.

Person 2: Put a queen-cell onto what would be the center frame

a) Bees were scooped off of the combs on to which they had been poured in the beeyard.

b) They were then poured into the mini-nuc.

We found this takes 2 people to go quickly: one to hold the frame up, the other to scoop and pour.

Person 2 (again, not a typo): Put the mini-frame with the queen cell into the nuc

Person 1 (again) :  put the final frame in and closed the mini-nuc. This happens fast.

Person 5 : Walked the mini-nuc over to the pallet where it would spend the next 2 days, in a cool, dark environment.

The mini-nucs were placed on regular shipping pallets, in a dark, quiet corner of the room

They were stacked 3 mini’s tall, but separated by ample space for air-flow.

Two fans were left on to keep the mini-nucs cool.

We drew on all the mini-nucs to hopefully help the bees determine which nuc was theirs.  And there we left them for 2 days. 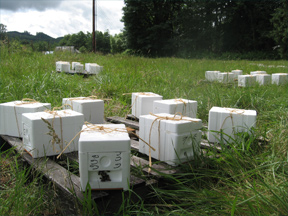 On the 2nd day, we moved them to their mating yard.

We left them alone for about 10 days then went to check on them.  The majority seem to have taken brilliantly. 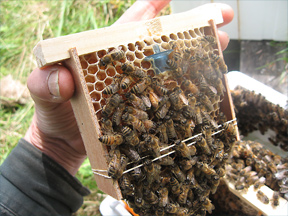 Successful emergence for the queen

Coming next: four of us will take a shot at grafting and putting those laying queens into cages so they can be distributed.  Speaking for myself, I expect there will be something of a learning curve in the grafting, but it should be fun….